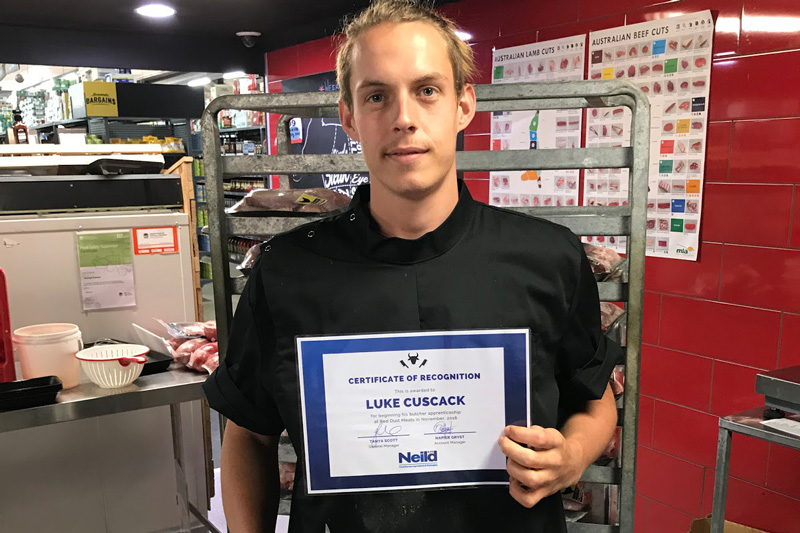 Neild & Co’s new Apprentice Program has been formally running for three months now and the response has been very positive. It is a unique program within the Retail Meat industry where loyalty is an essential part of business.

There are more than 4,000 retail and wholesale butchery businesses across Australia and their viability depends on a commitment to training young butchers. Neild & Co. is excited to be part of this industry by recognising and supporting the next up and coming butchers of tomorrow.

Further to our one on one relationships with local Butchers and their apprentices, every year Neild and Co supports World Skills. In association with Granville TAFE which runs Retail Butchery courses, we provided ingredients and packaging used in the National Championships for Retail Butchery as part of our World Skills support.

The apprentice program was born after one of our long-time customers shared with his Neild & Co account manager, Napier Gryst, about how his relationship with Neild’s began.

“He told me this fantastic story,” said Napier. “When he was an apprentice butcher, the Neild rep at the time presented him with his first professional knife. He has never forgotten it and has been loyal to Neild & Co ever since. Of course he isn’t an apprentice anymore – he owns his own butchery business.”

The Neild & Co sales account team regularly visits their customers (either fortnightly or monthly if they are regional). In their travels they see and talk to the teams in each store.

If a new apprentice has started, the account manager reports back to head office where we organise a certificate and a Victorinox Knife as a gift from Neild & Co. It’s fun to be part of the apprentice’s initiation and to encourage them to stay in the industry.

Research from Deloitte Access Economics indicated that apprentices and trainees who do not complete their qualification cost Australia over a billion dollars annually, with the cost borne primarily by small and medium sized business and government.

One of the most common reasons apprentices don’t continue is because of a lack of connection with colleagues and their managers, particularly in their first year.

One of our longest-serving account managers, Kim Hanson is famous for his friendly manner as he gets to know everyone in the clients’ business, not just the boss.

“He comes regularly and makes a point of talking to the staff, especially the juniors, asking their names and getting to know them,” said one of Kim’s customers.

“People remember if the representative just comes in only speaks to the owner/boss. It makes sense to form relationships early, based on respect. Most of these workers go on to open their own shops. When it comes to finding a packaging supplier they trust, things like this make a big difference.”